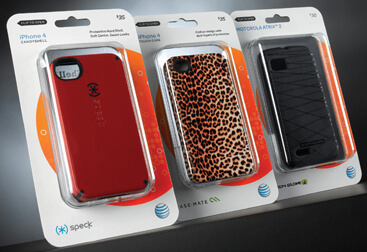 According to Andy Blackmore, Display Pack’s Director of business development, the  award-winning and patented design has been a great success for AT&T.  “So much so,” he said, “that in fact, the design has not changed since its development. That’s unheard of in our industry.”

Initial feedback from AT&T retail branch managers after the new package introduction  was that it was highly successful at the point of sale. AT&T soon moved several new  SKUs—more than 100—to the Accessible Pack. The consistent package shape and graphics along with the 360-degree product view make it easy for the consumer to recognize the different product lines. The ability to open the package and “try it before you buy,” gives the consumer hands-on confidence in their purchase.

This package re-design reduced the overall size in both paperboard and plastic, and retailers are able to merchandise more products in a smaller area.

“The only significant change to the packaging is that we switched from an RPET material to Terra PET back in 2011,” said Blackmore. Because Terra PET is derived partly from renewable sugarcane, it makes it an even “greener” package.

Since its introduction, the Accessible Pack has found its way to new customers, such as Fellowes, Cellular Green and Body Glove. Display Pack has also developed additional  patent-pending designs for the Accessible Pack for other industries beyond wireless electronics.

Any cookies that may not be particularly necessary for the website to function and is used specifically to collect user personal data via analytics, ads, other embedded contents are termed as non-necessary cookies. It is mandatory to procure user consent prior to running these cookies on your website.